Occasionally you will run into an unusual problem that requires you to scratch your head a bit.  If you know the basic systems and what they do, you can usually figure out what’s going on.  Following is a smattering of some of the more unusual or fluky things that I’ve run into as a home service technician:

If your fridge is warm, always check your controls first.  Many a time, I was fridge “complaint, only to find that the controls had been magically shut off.

When the little darlings of the household were queried about this divine occurrence, you could literally see the halo forming around their heads.  “Did you touch the refrigerator?”  Mom would ask.  Standing beside the refrigerator that hadn’t moved an inch in all of his (or her) six years, the child would inevitably reply:  “What refrigerator, Mom?”I’m sure that my soul will burn in hell, but it was no moral dilemma for me to charge the 30 dollar service fee in such cases.  One fellow whose unit I “fixed” in this way lost well over 500 dollars worth of meats from his packed-full deep freezer.

Only one time did I see a truly unexplainable occurrence of the controls getting shut off.  This was a single lady of about 55 with no kids, who had owned the refrigerator for over 25 years.  I’m not trying to harp on kids;  it’s just that as a home service tech, I’ve seen a lot of money wasted on unnecessary (and expensive) service calls with suspicious circumstances in homes with kids.

Do yourself a favor; check the controls first.  Set them in mid-range settings.  You might save yourself a lotta time, trouble, and expense.

One of the more perplexing problems that I ran into was a young couple (with 4 or 5 kids) that had a warm fridge.  Upon investigation, I discovered that the Freon tubes leading to and from the evaporator (above it on their side-by-Sid fridge) were heavily frosted with clear, solid ice.  Also, the wires leading to the evaporator fan and defrost heater were heavily caked with solid ice.  I didn’t understand that frost pattern at all, and evidently I was rushed that day, so I replaced the defrost timer and melted the ice, fully figuring I’d get a callback.  Sure enough, five days later, they called me back.  Same problem, same weird frost pattern.

I took off the evaporator cover panel and just stood there and STARED at the thing for about ten minutes. (Sometimes that helps me to think.  You can’t do that if the customer is standing there, looking over your shoulder.  But he was at work, and she was busy with her kids.) I was just trying to think of where all that moisture could be coming from.

Suddenly, I noticed a hole, about I” in diameter, in the upper left corner of the defrost compartment.  I pulled the fridge away from the wall and saw daylight through the hole.  It was the pre-drilled hole for the icemaker water tube.  (they did not have an icemaker, but most modern fridges come pre-drilled and wired for icemakers in case you ever want to install one.) the warm, humid air was feeding straight into the evaporator compartment!! I asked the lady about it.  She said that her husband, just messing around, had pulled the little cover off the back of the fridge “about two weeks ago.  “I stuffed the little hole with some bubble-pack that I just happened to have around and duck-taped both sides to seal the hole.

Ignorance really can cost you.  But at least the kids didn’t do it this time.

I personally think that door seals are one of the most misunderstood pieces of the refrigerator.  Ask a do-it-yourselfer about why his fridge is warm, and the first thing he’ll say after “I don’t ‘do Freon” is “but let’s check the door seals.”  Door seals rarely have problems over the life os the fridge.  The only ones I’ve seen go bad are in households that have dogs or cats that like to chew or sharpen their claws on them, or kids (there are those pesky kids again) that like to climb or hang on the refrigerator door.  A really bad door seal problem is most likely to cause a defrost problem, due to humid air getting into the fridge.

Door seals are magnetically held to the door frame. (See for a typical cross-section.)

Unless the seal is shredded or you can physically see a gap between the seal and the door frame with the door closed, there is no reason to suspect a door seal problem.

To replace the seal, you must have a nut drive of the proper size.  A power cordless drill-driver is better.  A magnetic tip may prevent you from going crazy trying to hold the driver, the screw, and the seal at the same time.  One side at a time is better.  The idea is to prevent the plastic inner door liner (or shelving) from drifting around—if you have to re-align it, it can be a long, frustrating, trial-and-error process.  The new seal will fit in the same way as the old one came out.

You are much more likely to have a door alignment problem or warping.  There’s not much you can do with a badly warped door except to try to warp it back into shape or replace it.

With the door closed, measure the gap around it; top and bottom, left and right.  Check if the door edges and refrigerator edges are parallel.  If the measurements indicate that the door is badly out of alignment, re-align it be loosening the hinges slightly (one hinge at a time) and shifting the door around.  It may take a few tries to get it aligned properly.

Remove anything obstructing the seals. Sometimes the kick plate will get in the way.  If its metal, you may be able to bend it slightly to solve your problem.

If you have to move your fridge for any reason, make sure that you keep it upright.  If you turn it on its side there’s a strong probability that the compressor oil will run out of the compressor and into the condenser, and when you start the fridge, the compressor will burn out within a few hours or even minutes, for lack of lubrication.  I’ve heard of people getting lucky and getting away with it; maybe they just happened to lay it on the “lucky” side of the fridge.  It’s not worth the risk.  If your fridge has been laid on its side, stand it upright again but don’t plug it in for a day or two.  Just hope that either the oil drains back into the compressor or that it didn’t run out in the first place.

Once I was called to the home of a little old dog-breeder who had complained of being shocked while opening his refrigerator door.  When I arrived, I couldn’t feel anything at all—until once I happened to be leaning against the metal door of his oven (opposite his fridge) when I touched his door—ZAP! I put a voltmeter between the two doors and discovered 50 volts potential!!

It turned out that the mullion (anti-sweat) heater in his door had shorted, and was grounding wherever it could—right through him to the oven door.  Since this happened in a not-too-humid environment, the solution was simple.  I disabled the heater by disconnecting and insulating the heater leads at the base of the door, where they went into the fridge.

This story is made even more dog breeder’s wife had just had open-heart surgery and a pacemaker installed three weeks before.  I shudder to think what could have happened had she touched the fridge.

Another interesting observation about mullion heaters is that if your fridge starts to become warm, one of the first signs may be that the door jamb starts to feel down-right hot.  This happens when the refrigerator is no longer removing heat from the doorframe and the mullion heater inside.  This is especially prevalent in the doorframe between the food and freezer compartment in a side-by-side. 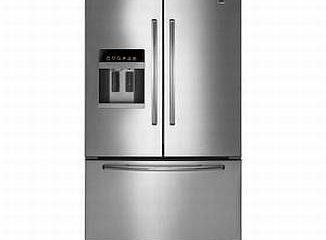 Storage times for the Refrigerator and Freezer

This article is an excerpt from the book called “1001 Ideas for Kitchen Organization” by “Joseph R Provey”. List all the food items which could be in your fridge with approximate storage times for the Read more… 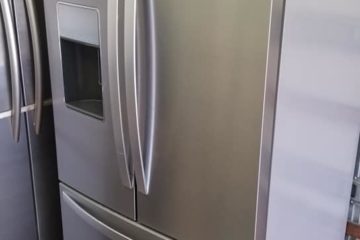 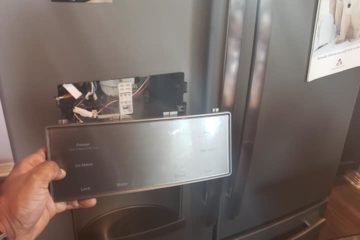 This blog post about troubleshooting Ice Maker, listing problem, problem cause, quick solution. you may have to call a professional refrigerator repair company some times where the problem is more serious and involves safety issues. Read more…